Details of our Plan for Restoration

The aim of our Investing in the Legacy of Eternity Campaign includes the following:

·      Photography and measurement of original stenciling and murals

·      Re-painting the newly plastered ceiling with the original design

·      Stenciling the walls of the nave, and sanctuary

Below, you will find an original transcription from a local newspaper which describes the church’s artwork and theological motif from the 1890s: 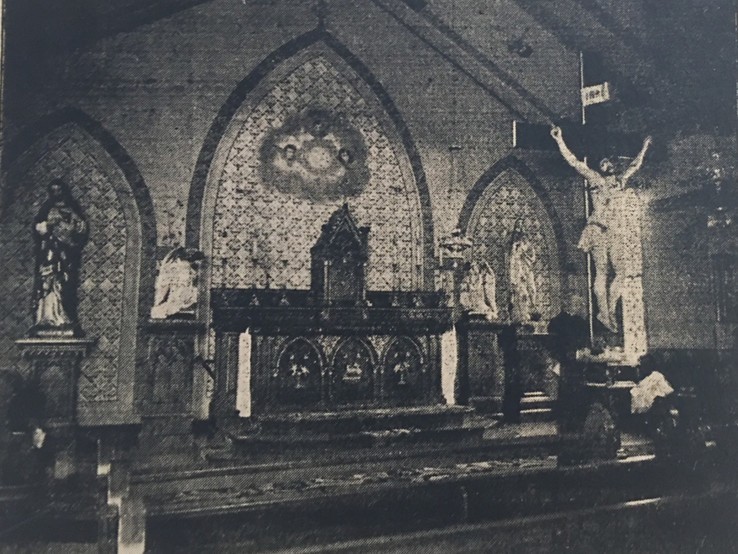 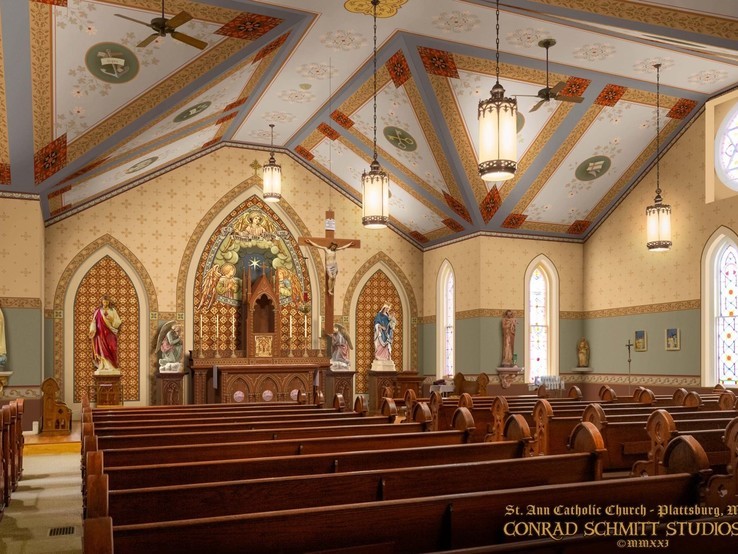 Description of Painting in Church (1891)

St. Ann’s church, this city, rejoices in new and beautiful frescoes, just finished. The church is
cruciform, apse and nave 70X34, transepts each 10x34, tower about 75 feet high. The ceiling
rises from the walls, forming a cross five feet wide at the top. The fresco of the ceiling is divided
into eighteen panels, in each of which, except one broken by the tower, is an emblem showing
some effect of God’s love in man’s redemption.

Commencing on the east panel of the south transept are the serpent and apple, telling,
indeed, the sad story of the temptation and fall of our first parents, but also reminding us of
God’s loving mercy in immediately promising the Redeemer. The next emblem, the tables of
the law, tells us the same story of love; the promise frequently renewed during four thousand
years in the Old Testament, and particularly this enlightening on Mt. Sinai man’s conscience
blinded by sensual indulgence. Next we are brought to the scene of the Last Supper, where our
loving Savior instituted a means by which He is with us to the end of the world, not leaving us
orphans by His death.

.... Passing from this we are reminded of His cruel and humiliating sufferings from that
instrument of man’s fierce cruelty, the lash. But testimony of still more excruciating torture
meets our eyes as we turn to the north side of the church. We are reminded that a tortured and
exhausted Living Man hangs for hours from nails driven though His hands and feet, and to
quench the burning thirst which follows torture is offered only vinegar and gall, and yet in the
midst of all these sufferings and most savage insults the Divine mildness of His countenance is
seen depicted on Veronica’s veil. Who is this Man? J.H.S., Jesus Hominum Salvator. Jesus Savior
of men. By death He gave them life. We turn and the banner of victory tells us that the grave
gave up its Victim and that He Who patiently listened from the cross to these words: “Others
He saved, Himself He cannot save; Let Him come down from the cross and we will believe Him;”
gave these unbelievers strange proof by the rising from the grave. By the dove in the sanctuary
on the north side, we are constantly reminded of Christ’s promise made before His
resurrection, fulfilled on Pentecost. I will send you the Holy Ghost, the Spirit of Truth, to teach
you all things and to abide with you forever. On the south we have the motive of all—God’s
love who like the pelican feeds His children with His own Blood.

In the triangular panels forming the center of the cross are emblems of the fruits of the
cross: Our Mother—“Son, behold they Mother.” The theological virtues, Faith Hope, and
Charity. The angelic virtue of purity, the keys of heavenly treasures which He left to His Church,
and the cross of immortal glory which will be ours if we “hear her” and “follow Him.” Over the
tabernacle are cherubim and the star of Bethlehem, which stood over the child, when
indicating the same real presence.