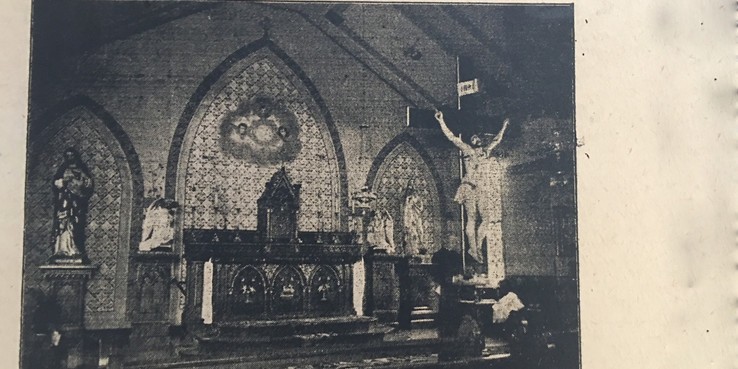 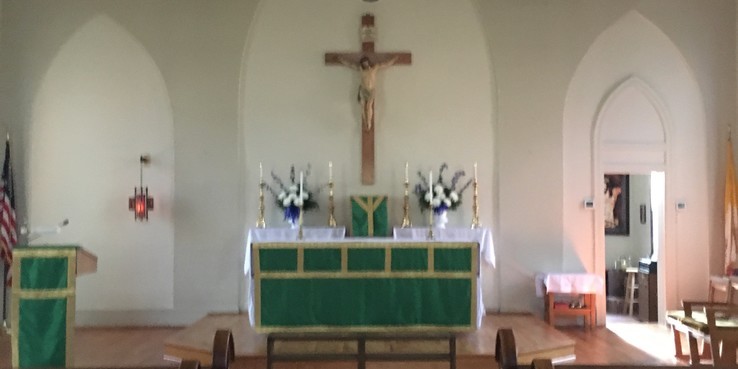 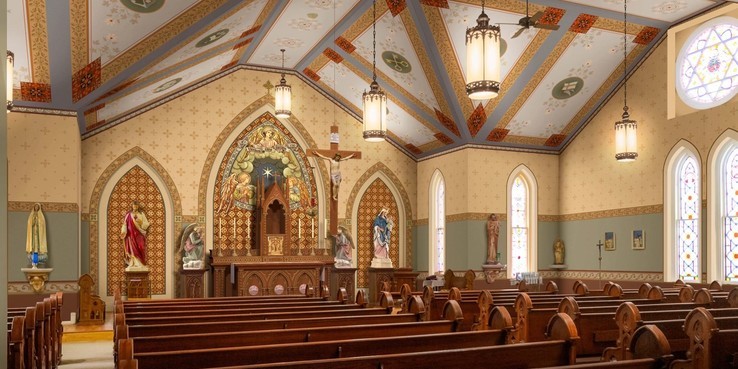 Our Legacy -Investing in the Gift of Eternity

The Word Was Made Flesh, and Dwelt Among Us

When the young Fr. Denis Keily came to Plattsburg in 1884, he would've found only a handful of farming famlies from Ireland in a small Missouri town with an A-frame church.  The goal of erecting an edifice richly adorned for the worship of Almighty God would have appeared as a pipe dream.  But cannot God elicit faith from stones?

It was not but four years later that, with the help of God, the faithful were able to erect the brick English Gothic church we have today and not long after, this Heavenly dream became a reality.  As one article stated from the late 19th century, St. Ann in Plattsburg was a jewel box -- a kaleidoscope of color and symbol which drew Catholic and non-Catholic alike into the mystery of the life of Christ among us.

NOT AN ORDINARY BUILDING:

The church is not our living room or our dining room.  No, it is meant to evoke the high ideal of the Heavenly Jerusalem, the place where we all hope to be.  And for Fr. Keily and his parishioners, this image was not a lofty fantasy, but one that became a pregnant reality.  Replete with 17 images on the ceiling of salvation history from the Fall to Pentecost, would carving in the Gothic revival style popularized in the late 19th century in England and Ireland from wher our forbearers of faith hailed, St. Ann not only evoked a unique image of the Catholicism of its founders, but reached far beyond that earthly precipice.  St. Ann church showed what heaven was supposed to be like --eternal and poignantly provocative with the immensity of God's coming into the world in art, an image tha would leave the spiritually wandering satiated with the eternal power of the Gospel and believers with a radiant intensity of Faith.  Not based on this or that person, this or that family, our church building reached beyond temporal generationsevoking a story that stands on its own --the birth, passion, death and resurrection of Our Savior and its eternal consequences for humanity.

Lofty ideals, one might say, for the Catholics of this small town, but Fr. Keily never thought so and neither did the parishioners of St. Ann.  They believed and built a chruch not only for the people of that time, but for the generations of believers to come.  To be captivated, infatuated with the things of God was their goal; should that not be ours as well?

Today, we have an opportunity to restore this dream and make it a reality among us.  To reach past ourselves, our own life and faith experiencs to something that is beyond us -eternity -which transcends us, and yet is imminent in the Lord's Divine Presence in the tabernacle. To something that is beyond us in the here and now -legacy.  The legacy of eternity is different than any other because it allows the Faith to speak to people we will never meet, never encounter, and will allow it to live far beyond ourselves.  WHat sort of legacy do we want to leave?  What will generations say about us years from now who come to visit this holy place? That is for God to decide, but ultimately up to those of us who, inspired by this same faith, ever ancient, ever new, will strive once again to build, not a city of man, but a city of God, a worhty dwelling place for the Lord and a fitting Temple for Divine Worship.  With the grace of God, may these stones, these walls speak again -- the Word was made flesh, and dwelt among us!

Is God calling you to tell His story?  Is God calling YOU to make a gift that speaks not of us, but rather of the life that awaits all of us in Heaven?  Our founders thought so; what do you think?  Should these walls speak again?

The restoration of St. Ann's has been entrusted to Conrad Schmitt Studios.  Since 1889, CSS has been privileged to provide decoration, resoration, stained glass and other artwork to enhance worship spaces throughout the country.